Some videos take a little time to load. Please have patience. (We shot them in Hi-Res so you have a better learning experience.)

"Grant, there is something to be said about integrity in business. You and your company certainly personify that!"

"Words cannot begin to express our gratitude and appreciation for the beautiful deck you've built for our family. We were considering selling the (house) and abandoning the whole thing. You made our dream a reality and you did it better and in less time than we ever thought possible!" 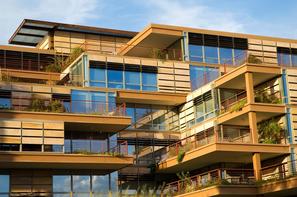 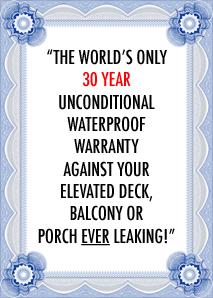 THIS IS THE SIMPLEST, MOST PLAIN SPOKEN
COMPREHENSIVE 30 YEAR WATERPROOF GUARANTEE AGAINST LEAKING YOU COULD ASK FOR!

CLEVELAND, OHIO - Grant Barlow has done what no other waterproof vinyl deck installation company has ever done — guarantee his workmanship for 30 years against leaking. And, he's done it with very little fine print!

My Waterproof Deck.com features, installs, and recommends the best Luxury Vinyl Deck Skins. Only premium products. The Deck Skins we use come with a 15 year Guarantee against mechanical failure. But, since Grant has been installing Luxury Vinyl Deck Skins, (nearly 30 years) there hasn’t been a single failure of the product. Therefore, adding a thirty year waterproof guarantee on his labor was just a common sense, logical thing to do. Why? Because…

"IF YOU AREN'T GOING TO STAND BEHIND YOUR PRODUCT AND SERVICE ― GO FIND ANOTHER LINE OF WORK!"

In 1973, Grant was asked to waterproof a rooftop deck over a rear entrance way to a small commercial building. On the second floor of this building was an office. The office had a door that lead out to the deck. The deck was one of those old-fashioned, flat decks with white metal pipes for deck railings.

It's kind of funny, because the deck was not in a very nice place. It was crammed in between tall, skinny two-story homes packed very tightly together. The area where the building existed was known as "Little Italy".

The deck was covered in a tar paper which was coated with black, gooey tar that dried to a hard, dull finish. You've seen this kind of deck or elevated porch if you've been around a while. In those days, no one thought twice about aesthetics of decks, balconies and porches. There are thousands of these decks still in existence from coast to coast.

Below the deck was a rear entrance way. The entrance way had beautiful wooden paneled walls that lead up a flight of stairs to the second floor office. The second floor had been used as a gambling parlor during Prohibition. It was crafted by old-world Italian artisans — and it was beautiful.

One day, the deck coating failed and water started leaking into the beautiful wood paneled walls of the hallway below. Then, water began leaking back into the structure. It happened at the joint where the walls of the building met the floor of the deck. Of course, black mold followed.

Grant Barlow had a reputation through the quaint neighborhood for being a capable, honest, hardworking remodeling expert. He was summoned to the building and asked if he could waterproof the deck permanently. He said believed he could.

He went to work perfecting a process that would eventually end in his creating "My Waterproof Deck.com".

So, what does all this have to do with the 30 Year Unconditional Guarantee against leaking? Everything.